I’ve been using Android phones for about 5 years now and they’ve come a long way in that time. When I got my first Android phone (an HTC One) there was little doubt that the comparative iPhone of the time was the superior product. It’s now 2017 and that is no longer the case. Today, flagship Android phones stand side-by-side with iPhone and often come out on top. For a long time I shied away from Samsung phones for various reasons that I’ll get into later but this year after reading a lot of reviews I thought it was time to give them a shot. I’ve had the device for a few months now and here are my thoughts.

The newest trend in smartphones seems to be the bezel-less display and the Samsung GS8+ is no exception. The screen goes from one side to the other with nary a bezel to be seen. It has a slight curve on each side which gives the illusion that the display disappears over the edge. The top and bottom bezels are minimal in order to avoid the “notch” issue that the upcoming iPhone X suffers from. I must say that the screen is, in a word, excellent. The edge-to-edge design really makes it feel like the entire device is screen (unfortunately putting it in a case pretty much destroys this illusion) It begs to be used as a tiny TV and videos look fantastic. There’s a big caveat here, however. Because the entire front of the device is display it leaves no room for front facing speakers and I have found that the speaker location can be very problematic when you are watching videos. My hand tends to cover up the speaker and I have to adjust my grip to hear the sound clearly. This may seem like a trivial issue but it begs the question: is the bezel-free display actually better for users or is it just a marketing ploy to make the phone look more unique compared to its competitors. That screen does looks fantastic on the poster: 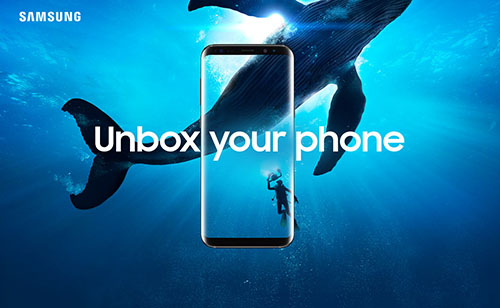 The new Pixel 2 by Google was announced last week and it takes a more pragmatic approach by leaving large bezels on the top and bottom but using that space for front facing speakers. Now, I haven’t had the opportunity to use this device but I can imagine that the overall experience of watching video on the Pixel 2 is more enjoyable than the S8+. Once you’re engaged in what you’re watching do you really notice the bezels anyway? Probably not. You will, however, notice if you suddenly can’t hear anything because your hand is covering the speaker.

The other major flaw which has been well documented is the location of the fingerprint sensor. Generally speaking I think the fingerprint sensor works a little better on the back than the front of a device since it’s where your finger tends to rest naturally. However, in this case, Samsung really dropped the ball placing the sensor right next to the camera near the top of the back panel. This is a problem for 2 main reasons: 1.) It’s hard to reach, especially on a tall device like this one and 2.) You end up smudging the camera with your finger all the time. I imagine there was a valid reason for the decision whether it be technical issues or efficiency reasons but it just feels like a major miss on hardware that gets lots of other things right. I suspect this will be remedied in the GS9.

There is a headphone jack. I use it a lot. Thank you Samsung. Do me a favor and keep it moving forward.

Battery life so far has been very good. I usually go to bed with between 40 and 50% power remaining and have forgotten to charge it overnight a few times without worrying that it would die out the next day. Check back in a few months though as my experience with Android phones and battery life is that it falls off rather quickly and, in the case of my LG G3 took a total nosedive when I upgraded from Lollipop to Marshmallow.

This is the first Samsung device I’ve owned but I’ve known a bunch of people that have had other Galaxy phones and I’ve always been critical of the amount of crapware, redundant apps, and extraneous features that Samsung tends to ship. With the GS8 I feel like they’re getting better but there are still a ton of duplicate apps that are just Samsung versions of existing Google apps. That being said, the Samsung apps that I do use seem fine. There is one piece of software that Samsung insisted on adding that does need some discussion:

Bixby. Samsung…seriously just stop. There is just no reason for Bixby. It tries to do the things that Google Assistant already does but it doesn’t do them as well. They even went as far as adding a hardware button on the side of the phone entirely dedicated to launching Bixby. Thankfully, they recently rolled out an update that allows you to turn this off because it was so easy to accidentally hit this button and find yourself staring at the Bixby Home screen instead of your actual home screen. It’s very clear that Samsung wishes they controlled the entire ecosystem but since they’re tied to Android and Google, the only way to do that is re-invent the wheel in the hopes that no one will notice. They try so hard to make everything feel like a “Samsung” experience instead of an Android experience. Now, maybe this makes good business sense. Separate yourself from the pack of other Android devices so that customers don’t realize that they can get virtually the same experience on any one of Samsung’s competitor’s phones. Unfortunately, this means that the customer gets an inferior experience because no matter how hard they try, Samsung can’t out-Google Google. So, users who aren’t as tech-savvy as myself will use Bixby, as well as Samsung’s apps and they’ll sync their data with Samsung’s cloud and they won’t realize that they don’t need any of that stuff.

Another software feature that I feel needs to be mentioned is Face Recognition. Apple is making a big deal about face recognition on the iPhone X because they have to. By removing the fingerprint sensor, face recognition becomes the only viable option for unlocking the device securely using biometrics. Here’s the thing, face unlock has been available on Android for a few years now. That being said, I would have expected it to work much, much better than it does on the S8+. It is extremely unreliable. Sometimes it works almost instantaneously and the next time just not at all and I’m forced to use my fingerprint or my unlock code. I seriously hope that Apple has figured this one out because this inconsistency make the technology essentially useless in my opinion. If you can’t rely on it to unlock your phone every time it just becomes an annoyance rather than feature.

Other than that the skinning that has been done to the OS and the overall feel of the phone is very polished and slick. There are some nice little touches here and there that are actually welcome additions to the stock Android experience. I especially like the always on display and the “swipe up” gesture that brings up the app drawer from the home screen.

As an amateur photographer I would love to do a more in-depth review of the camera some time but for now I’ll just say this: The camera on the GS8+ is excellent. Is it the best camera on any smartphone right now? I have no idea. But it takes sharp pictures, performs admirably in low light, and is packed with all of the software features you would expect in a modern smartphone camera like: HDR, manual controls, Instagram-like filters, portrait mode, and even some Snapchat-esque augmented reality filters. I haven’t played around with a lot of these features but I will say that the portrait filter, while rather impressive technologically seems a bit heavy-handed.

Speaking of those software features: It’s starting to become clear that smartphone cameras have begun to reach the maximum of what can be done from a hardware perspective. I mean, there is only so much you can do with a sensor that small. Because of these limitations companies are moving more and more to software in an effort to provide higher quality photographs. In recent years we’ve seen the addition of dynamic HDR, cameras that take multiple photos and merge them, real-time software filters that provide blurred backgrounds (portrait mode), and now, with the newest iPhone, even dynamic lighting control all done by AI powered software. As I mentioned above, these features are very new and are only pretty good at the moment. That being said, it’s very easy to project a couple of years into the future and imagine improvements to this software that would make it possible for these devices to compete toe-to-toe with much more expensive mirrorless cameras. It will be interesting to see how far the can push those boundries in the coming years.

It’s interesting, because when I started writing this review I generally felt as though this was an excellent phone with very few flaws and, in many ways, it IS a great phone. The screen is beautiful, it’s fast, the battery life is very good, and the camera is excellent. However, the more I wrote about the devices flaws, the more I realized that Samsung is trading the best user experience for the best profit experience. They are building phones that are designed to lock people into an virtual walled garden that doesn’t need to exist. Even the hardware is optimized for commercials and posters and not for actual use. I bit the bullet on this phone and I’m stuck with it for at least the next 2 years. Now, honestly, I’m fine with that. It does all the things I need it to do, it looks good, and I’m savvy enough to ignore all the Samsung nonsense and use the phone the way I want to use it. But barring a major change in how Samsung approaches the way it builds phones, this will probably be my last phone made by them.