Reading Bucket List is an ongoing series in which I read a classic book and share my notes and thoughts about it. This is the first post in the series 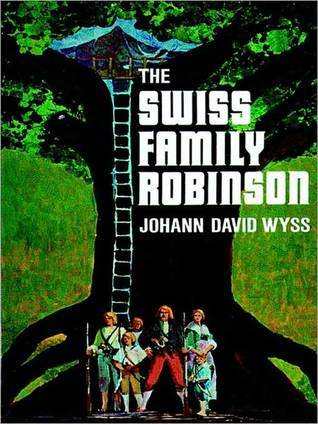 The Swiss Family Robinson, published in 1812 by Swiss novelist Johann David Wyss tells the story of a family (of Swiss origin no less) stranded on an island somewhere in the East Indies after their ship was wrecked. The story was written as an instructional guide on “family values, good husbandry, the uses of the natural world and self-reliance.” 1 The author’s goal becomes self-evident early in the story when, soon after arriving on the island of New Switzerland the father, William, spends little or no time securing the family’s rescue. Instead, the family dives head-first into working toward a permanent settlement on the island. It’s clear that the author used the shipwreck as a means to get the family together in one place without outside influence so that the lessons could begin in earnest.

The story spins out as a series of lessons masquerading as adventures that teach all kinds of things from how get sugar out of a fictional sugarcane plant, to creating shoes, to training all sorts of animals. Although the individual lessons are mostly useless in the modern world (and probably even if you were stranded on a deserted island), the major underlying points regarding the evils of idleness, cooperation, and self-sufficiency are always in the background making themselves known. In fact, Wyss cleanly summarizes his own story with an excellent statement near the very end of the book:

Children are, on the whole, very much alike everywhere, and you four lads fairly represent multitudes, who are growing up in all directions. It will make me happy to think that my simple narrative may lead some of these to observe how blessed are the results of patient continuance in well-doing, what benefits arise from the thoughtful application of knowledge and science, and how good and pleasant a thing it is when brethren dwell together in unity, under the eye of parental love.

As an aside, one aspect of the story I felt was rather odd was the way in which the family treats the wildlife on the island. Certainly the animals they domesticated for use as beasts of burden makes perfect sense given the resources available to them not to mention the state of technology in the early 1800s. That being said, there were a number of occasions where mischievous animals (mostly monkeys) were subjected to capital punishment for simple acts of trespassing. All manners of methods were used for the execution from shooting, to traps, to poison with only the slightest hint of regret. It was, of course, a very different world 200 years ago when the book was published but I have to wonder if this was the prevailing mentality on the treatment of animals at the time then it’s no wonder humans did so much damage to the natural ecosystem in those times.

Although The Swiss Family Robinson is clearly a book aimed at children of the day, the dedication the family shows to each other and their resourcefulness is nothing to be ignored and can be rather inspirational at times. Certainly the lessons that Wyss is trying to teach have value no matter the century. As a father of 3 myself, I would love to see my kids working harder towards their goals, and enjoying the satisfaction of being self-sufficient. If nothing else, reading this book has encouraged me to try to work harder to instill these values into my own children so that they may reap the rewards of a life well-lived.